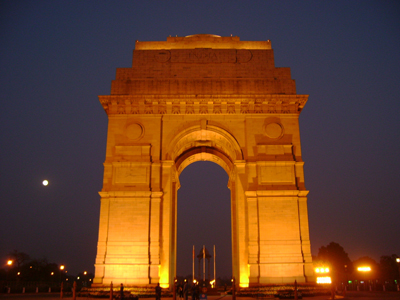 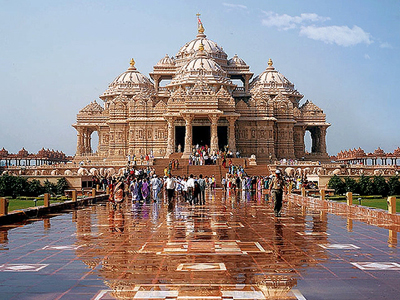 Delhi :- Delhi, also known as the National Capital Territory of India is the capital of India. Delhi was the site of ancient Indraprastha (Khandavprastha), the ancient capital of the Pandavas during the Mahabharata. In AD 1639, the Mughal emperor Shah Jahan built a new walled city named Shahjahanabad, in Delhi, which served as the capital of the Mughal Empire from 1649 until the Rebellion of 1857.Shahjahanabad today is Old Delhi. The greater part of Old Delhi is still confined within the space of Shah Jahans walls, and several gates built during his rule—the Kashmiri Gate, the Delhi Gate, the Turkman Gate, and the Ajmeri Gate—still stand.

In 1911 the British determined to shift the capital of India from Calcutta (Kolkata) to Delhi, and a three-member committee was formed to plan the construction of the new administrative centre. The key architect on the committee was Sir Edwin Lutyens; it was he who gave shape to the city. The British moved to the partially built New Delhi in 1912, and construction was completed in 1931. A new capital city, New Delhi, was built to the south of the old city during the 1920s. When the British left India in 1947, New Delhi became its national capital and seat of the union government.

Delhi's culture has been influenced by its lengthy history and historic association as the capital of India. This is exemplified by many significant monuments in the city, the Mughals and the Turkic rulers constructed several architecturally significant buildings, such as the Jama Masjid – India's largest mosque and the Red Fort. Three World Heritage Sites – the Red Fort, Qutub Minar and Humayun's Tomb – are located in Delhi. Other monuments include the India Gate, the Jantar Mantar – an 18th-century astronomical observatory – and the Purana Qila – a 16th-century fortress. The Laxminarayan temple, Akshardham temple, the Bahai Lotus temple and the ISKCON temple are examples of modern architecture. Raj Ghat and associated memorials houses memorials of Mahatma Gandhi and other notable personalities. Several government buildings and official residences reminiscent of British colonial architecture, including the Rashtrapati Bhavan, the Secretariat, Rajpath, the Parliament of India and Vijay Chowk. Safdarjung's Tomb is an example of the Mughal gardens style.  Chandni Chowk, a 17th-century market, is one of the most popular shopping areas in Delhi for jewellery and Zari saris. Delhi's arts and crafts include, Zardozi – embroidery done with gold thread and Meenakari – the art of enamelling.

Rajasthan cultural tour packages in India gives you adequate chance to look at the city till its depth. So choose the suitable Rajasthan Cultural Tour Packages for fun filled vacation. Rajasthan, well-known for its tradition and rich culture of great hospitality, is the major state of India and boasts innumerable tourist attractions. In fact, the state is a whole holiday package that is chained in palaces, forts, temples, deserts, monuments, mountain ranges, hill station, tiger reserves, wildlife sanctuaries and national parks. During your Rajasthan Tour, there will be barely anything more that you can want.

On your arrival at Delhi Airport / Railway station, pick up by our chauffeurs / Executive and check in at Delhi hotel. After freshen up go on for sightseeing tour in Delhi by A/C cab and exploring the city. Stay overnight at the hotel.

After breakfast at the hotel, morning pick up from Delhi hotel and leaving to Jaipur by AC cab. On your arrival at Jaipur, check in hotel. After freshen up go on for sightseeing tour in Jaipur by A/C cab and exploring the city. Stay overnight at the hotel.

Day 3: Pick Up from Hotel At Jaipur And Full Day Sightseeing In Jaipur

After breakfast at the hotel, go on for sightseeing tour in Jaipur by A/C cab. Relax overnight at hotel.

Day 4: Hotel Check-out From Jaipur Drive To Delhi And Your Trip Ends At Delhi Airport/Railway Station

After having breakfast at the hotel, check out from the hotel, proceed to Delhi with lots of sweet memories, and your trip ends at Delhi Airport / Railway Station