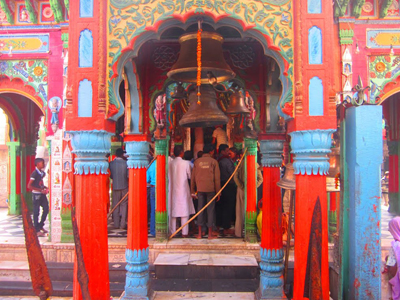 Jim Corbett :- The Jim Corbett National Park is situated in the Himalayan foothills, amidst forested mountains that range from 400m to 1,210m in height. Through most of the National Park flows the Ramganga River. It is said that a community lived on the banks of this river in ancient times. It is believed that these people cleared away a tiny part of the forest, and made the area their home. Evidence in the form of terracotta figurines and ruined temples further corroborate the fact that the Ramganga Valley was home to an ancient civilization.

The National Park has geographical and ecological characteristics of the sub-Himalayan belt. 488 different species of plants and a diverse variety of fauna is what this eco-tourism Park boasts of.The National Park houses around 110 tree species, 50 species of mammals, 580 bird species and 25 reptile species. The endangered Bengal tiger of India resides here. Dense moist deciduous forests mainly consist of sal, haldu, pipal, rohini and mango trees, and these trees cover almost 73 per cent of the National Park. 10 per cent of the area consists of grasslands.

Nainital :-  Nainital is a popular hill station in the Indian state of Uttarakhand and headquarters of Nainital district in the Kumaon foothills of the outer Himalayas. Situated at an altitude of 2,084 metres (6,837 ft) above sea level, Nainital is set in a valley containing a pear-shaped lake, approximately two miles in circumference, and surrounded by mountains, of which the highest are Naina (2,615 m (8,579 ft) on the north, Deopatha (2,438 m (7,999 ft) on the west, and Ayarpatha (2,278 m (7,474 ft) on the south. From the tops of the higher peaks, "magnificent views can be obtained of the vast plain to the south, or of the mass of tangled ridges lying north, bounded by the great snowy range which forms the central axis of the Himalayas.

Best Time To Visit :- However, the best time to visit Nainital is from March to November. During Snowfall in winters Dec-Jan this place becomes a must visit destination. Summer (March to June) are very pleasant with temperature never crossing 27°C and minimum is about 10°C. This is the best time for sightseeing and enjoying adventure.

Corbett National Park remains open throughout the year for the visitors from Jhrina zone. Every year Bijarani zone get operational from Mid of October and The core area of the national park Dhikala zone get operational from 15th of Nov. But the best time to visit corbett in winter is November to February , in summer March to June and in monsoon season July to October.

After morning breakfast the entire day is free to explore the Nainital and nearby areas, go for local sightseeing and come back to the hotel and enjoy your sumptuous dinner at the hotel.

Get up early in the morning pack up your bags and have your breakfast at the hotel and after breakfast further proceed to Delhi with lots of sweet memories, and your trip ends at Delhi Airport/Railway station.